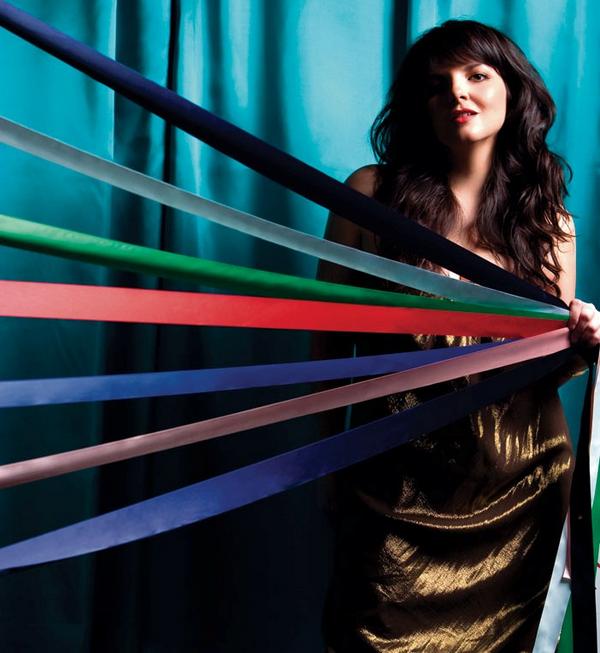 Incredible talent aside, she’s an artist with impeccable business instincts, a sweetness which transforms networking to easeful mingling, and a sound so addictive it converts fans to pushers .  It’s no wonder to me that she’s on a cosmic fast track to international indie fame.   The rising Vancouver star placed 4th in the first Peak Performance Project last year and has since attained management with 604 Records’ Jonathan Simkin, along with a sweet deal with his new alternative label Oregon Light Records.  Last week I sat down with Adaline to talk about what it’s like for her and how she gets it all done.

There’s a huge giant business and admin side of being a musician and someone who has reached your  current level of success must need some help, so who is your ‘we’?

It’s mostly me and I have some interns that work for me and I also have a label and they have a few staff members helping me out.

And the interns are from the label then?

Uh no, the interns are actually people that are just awesome, that are supporters of mine and just take on work for me for no money.  It’s really crazy. They help organize events and stuff.  It’s good because as a solo artist it’s so overwhelming because there’s just so much to do.

So how did you find these interns?  How did that come about?

It was weird actually.  It was on twitter.  I was really overwhelmed one day and I was just tired and I tweeted and was like ‘is anyone interested in getting some experience in the music industry and helping me out?’ and some people actually responded so I like took resumes and narrowed it down to 3 people who had the time and skills I needed in certain areas .

That’s freakin cool.. Is that a new thing?  Has anyone else done that?

I’m sure people have, but I think more people should.  I always feel bad for asking people to do things but they’re always like ‘you never ask us to do enough!’  So what I realize is that fans really want to be a part of your career and once you allow them to do that, not only is it exciting for them because they’re having a part in watching something happen with an artist, but it’s really great for you because you’re not so exhausted all the time.

So as an artist you have no choice but to go, go, go and it can be exhausting, do you ever lose your motivation? And what’s the biggest trigger for you?

It’s funny I was talking to Said the Whale the other day and ‘IQM’ moments (I Quite Music) came up.   And I think that one of the biggest things that triggers the IQM moments is comparison.  Comparison is so toxic in music but it’s so hard not to do it.  The old saying ‘comparison kills contentment’ is so true.  You can have a day where something great happens in your career and then someone else, especially when it’s one of your friends, has something better happen and it’s weird because you want to be happy for the person and you truly are happy for them, but there’s always this human nature part of you that’s like ‘why didn’t that happen to me?’.

So how do you come back from that?

I force myself to not give in to those feelings because they’re just so toxic and wrong.  I force myself to be around musicians all the time.  When I’m at someone’s show and I start to feel it sneak in I’m like ‘What is that? Oh, that’s that jealousy thing.’  So I stare it right in the face, I go right up to the front and I cheer, and I force myself out of it.  And when I do that, it feels goods.  It’s like ‘ahhh, life is good’ and I remember that there’s room for all of us.

But you’re right, with the recent changes in the music industry and the rise of the indie scene, competition is pretty fierce now.  Do you think it’s easier to be a musician today, or in the past?

It’s easier and harder.  It’s easier because anyone can be a musician now.  In the past labels would sign bands and that was how it worked and now it’s like you can do it on your own.  So that’s good.  What makes it hard about it is that there isn’t a lot of money in the industry any more.   The record labels are not making money the way that they used to.  So it’s good and it’s bad.  It’s opened the playing field, way more people are making music but there’s also so much content, so it is hard to have a voice in the crowd but if you’re good and you work hard then at some point you might be able to lift head up above the noise.

It’s really all just about the pie.  What’s your favourite?

Sour on the inside and sweet on the outside, is that like you?

Yeah, this is all a façade. I’m really a witch if you get to know me.

If you want to see a truly amazing Indie Artist who certainly is rising her head above the noise, I strongly urge you to catch Adaline’s live performance at The Red Room as part of the Peak Performance Project Concert Series Thursday September 23rd at 8pm.  I promise you’ll be blown away by her absolutely stunning, sexy voice and gripping, vulnerable performance.

EXTENDED ARTICLE ONLINE:  Adaline also talked about her journey from the day she decided to become a musician, to completing her first record, attaining management and what it was like to transition from ‘Independent Indie’ to ‘Indie Label’.   Read all that, catch video segments of the interview, and see an exclusive intimate performance clip, all at www.urbanpie.caS

Musical Sound in 4 words or Less:

Orchestral & Moody or Sexy-dance Pop (depending on the album )

At her shows off the stage*, iTunes, CD Baby

*Best way to buy so the artist can make the most money!

What she’d call the phase she’s in:

How Dan Mangan released me from 7 years of solitary confinement.